Tax and women’s rights are entwined. How tax is spent and raised matters more for women than men. And there is lots of potential for tax to bring about positive change in women’s lives – at the moment, developing countries give away massive unnecessary corporate tax breaks while services that women need struggle for funding, while at the same time tax could be raised more progressively.

By virtually every global measure, women are disadvantaged relative to men. Women do the vast majority of unpaid care work – such as caring for children, fetching water and performing household chores – in all countries. They are overrepresented in poorly paid precarious work. One in three women will experience violence in their lifetimes. Governments have the responsibility to help end gender inequality and ensure that women realise their rights. One of the keys to ending gender inequality is to provide more and better quality public services. These services will reduce women’s unpaid care burden, for example providing piped water eliminates trips to the well and providing safe refuges will prevent and respond to violence against women.

To fund these essential public services governments need to raise more tax. That tax will need to be raised progressively, meaning that those who have more income are paying a higher proportion of their income in tax than those living on very little. However, the most progressive taxes – on personal income and wealth – are underused. Moreover, corporate tax revenues in developing countries are much lower than they could be because of big tax giveaways by governments in the form of tax breaks for investment, and because of tax avoidance and evasion.

There is often a gap between tax policy and women’s rights. For example, ActionAid has found numerous developing countries which are giving away more than 0.5 per cent of their Gross Domestic Product (GDP) in corporate tax breaks in a bid to attract investors, despite evidence that tax breaks are largely irrelevant to investment. By comparison many developing countries are spending less than 0.03 per cent of their GDP on ministries that are focused on women’s rights and empowerment. Ending unnecessary tax breaks for companies would raise more tax revenue from people who can afford it and help pay for the vital services women need.

To raise more tax revenues for public services that could bene t women, and to do so in ways that promote women’s rights rather than undermining them, all governments need to:

Maximise available public resources, notably tax revenues, to invest in gender responsive public services that will help to end gender inequality and ful l all women’s human rights.
Establish gender-responsive budgeting to ensure tax revenue is spent in a way which promotes gender equality and upholds the right of all women to have a say in how public money is spent.
Raise taxes in the most progressive way possible, with more emphasis on direct taxation of income and wealth.
Ensure that companies are paying their fair share of tax including by curbing tax incentives.
Carry out tax impact assessments to identify the direct and indirect effects of taxes by gender, paying particular attention to the impacts of both taxes and public spending on the poorest women. End features of tax law which discriminate against women. 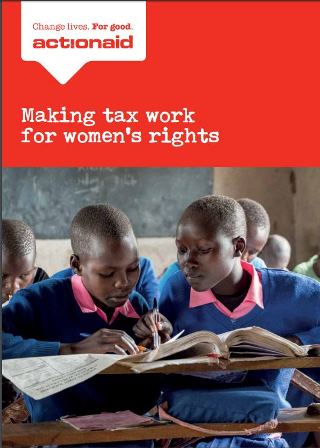