‘Climate Smart Agriculture’ is gaining increasing attention among governments, NGOs, academics, corporations and international policy spaces. As proponents attempt to use the climate negotiations at the UNFCCC (United Nations Framework Convention for Climate Change) and the UN Secretary-General’s Climate Summit to obtain official endorsement of the concept, a range of stakeholders are starting to take note and ask questions.

With the impacts of climate change being felt on food systems around the world, and the contribution of agriculture to global emissions also gaining attention, agriculture is one of the issues at the heart of climate change concerns. The concept of ‘Climate Smart Agriculture’ was developed by the FAO and the World Bank, claiming that ‘triple wins’ in agriculture could be achieved in mitigation (reducing greenhouse gas emissions), adaptation (supporting crops to grow in changing climate conditions), and increasing crop yields. But there is growing confusion and debate over what the term really means, what it can achieve, what is new about it, and whether it really can benefit food systems in the face of climate change.

Increasingly, civil society and farmer organisations are expressing concerns that the term can be used to green-wash agricultural practices that will harm future food production, such as industrial agriculture practices or soil carbon offsetting. Ultimately, there are no means to ensure that ‘Climate Smart Agriculture’ is either smart for the climate, or for agriculture.

ActionAid has been following these developments for a number of years, and was an early critical voice on the issue. This briefing has been developed to assist NGOs and policy makers to navigate the confusing language and false promises of Climate Smart Agriculture. 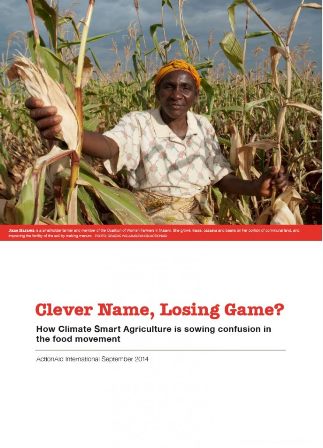