Ten African countries have signed up to the New Alliance for Food Security and Nutrition – the G8 countries’ main strategy for supporting agriculture in Africa that was launched in 2012. As the New Alliance has been under way for three years, some of its likely impacts are becoming clearer. This briefing – covering Nigeria, Malawi, Tanzania and Senegal – shows that some large companies involved in the New Alliance are already accused of taking part in land grabs in some countries. It also presents new research to argue that the initiative is further increasing the risk of rural communities losing their access to and control over land to large investors, largely through policy commitments on land titling and land reform.

Implicated in these reforms and risks of land grabs are the G8 donor countries bankrolling the New Alli- ance (the US, the UK, France, Italy, Canada, Japan, Germany and Russia) and the European Union. These governments must stop all engagement in and support for the New Alliance and replace it with genuine initiatives to support small-scale food producers and advance sustainable agriculture.

G8 states have committed $4.4 billion to the 10 countries of the New Alliance. The largest funders are the US and the European Union but the UK, France and Italy also play important roles. The G8 support for the New Alliance is part of a drive to secure larger agricultural markets and sources of supply in Africa for multinational corporations. New Alliance partner companies such as Monsanto, Diageo, SABMiller, Unilever and Syngenta have major commercial interests in Africa and close connections with Northern governments.

Our research shows that the four African countries under review are offering vast areas of land to large-scale investors under their New Alliance commitments: collectively, this amounts to 1.8 million hectares of land. 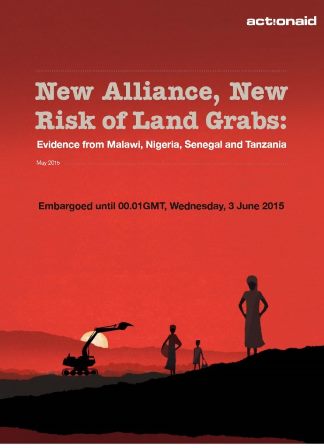